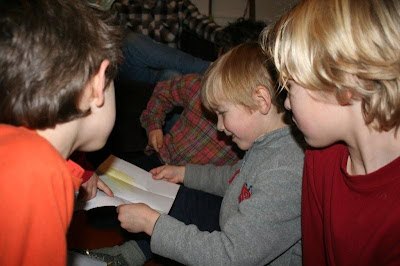 The following is a re-print of Rick Juliusson’s “A Simple Sixth Birthday” blogpost at Rick’s Turning Point. Thanks, Rick, for letting us repost these great ideas on a simple, and truly magical, little birthday party.

Zekiah’s sixth birthday continued to be a benchmark of alternating out-of-control and with-it-nesss, ending up more in the healthy latter category.

Thanks to a flu bug and friends travel, only 3 invited boys came to the party. That’s going to be our new rule – 3 kids – it was beautiful, easy, fun, like a themed playdate instead of a hectic bash. Instead of paying some high-stim pool or laser tag for entertainment, we just had fun at home with boys who are the right age to just have fun. Started with an improv story about the greedy Grand Poobah of Ptianderdorfendal, who sequestered all the jewels of the land only to have them stolen away under his nose. When the grant proclamation came for brave knights to scour the land and find them, the boys jumped into their boots and charged out the door on their quest, aided by rather obscure poetic clues scattered about that led them to the budding snow-drops, the neighbour’s bonfire, the well, linden tree and deep into the forest to finally find the jewels.

Triumphant young knight stormed back to the house to open three (3) presents that were all lovely, natural and non-electrified, all with hand-drawn cards, then quickly turned their energies toward selecting beads and making necklaces. Some home-made star-shaped bread with butter sustained them, then fresh cherry juice from last summer and a vegan chocolate cupcake with caramelized condensed milk rewarded them. As parents came back 2 hours later, they found their wild ones quiet and wide-eyed on the purple couch listening to how the new Grand Poobah of Ptianderdorfendal had created harmony in the land by allowing people to redistribute jewels to their neighbours.

Key ingredients to a party that had young Liam exclaiming repeatedly “This is fun, isn’t it!” :

The time may come when a home party is not enough, when the bowling alley or go-kart track is deemed necessary to keep up with the Jones’ boy. But for these 6 year olds, a fun, focused and slightly organized time together was all the birthday magic they needed.

Oh ya, our presents for our dear 6-year-old child? A 6′ length of bamboo to use for channelling water in outside play, and a maple branch that we will together cut and finish to be checker pieces. Simply six.