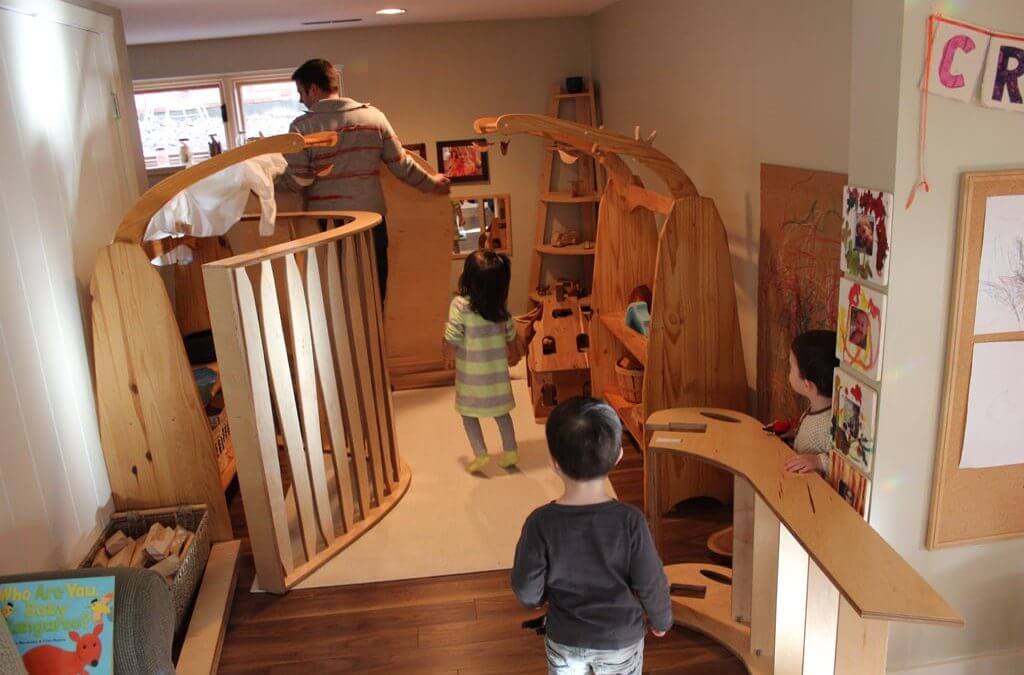 Megan Fraser shares her story and photo essay about the arrival of her new Natural Pod Loft and how the children in her centre enjoyed the new addition to their space.

Today was the big day, the day when our new loft arrived! I decided not to tell the children that a loft was coming, partly because I didn’t think they would understand what a ‘loft’ was and more importantly I wanted them to decide what it was. It is their space and I wanted them to define it. I also thought that in this way it would remain more flexible and adapt to their needs, interests and ideas. I did however let them know that a builder named Allan was coming (some of the children can become nervous when unfamiliar adults visit) and when he arrived they were so very excited! As Allan brought in each piece of the loft the children were curious and wanted to explore them. The stairs and railing immediately became tunnels and hiding places. Over and over the children breathlessly exclaimed, “wow!” and A. shrieked and proclaimed, “I’m so happy!”

The children went out for a walk and Allan had the time and space to construct the loft. It came together quickly and by the time the children arrived it was ready for them. They were clearly excited and I have never before seen them remove their boots and jackets so fast!

A. was the first to approach the loft. She stood at the bottom of the stairs for a few moments looking it over before she asked, “I’m going to climb?” “Yes,” I answered and she quickly scooted up the stairs followed by her friends. When she got to the top and looked around A. said, “A house.” “Yes, a house.” L. echoed. Ahh, I thought, and so it is named (at least for now).

LV. was immediately drawn to the railings and walked back and forth peeking between the slats. He then began calling loudly, “Anybody home? Anybody coming? Open the door! See Mommy?” I wondered what this game meant? Did the railings remind him of something at home? What was he connecting to? His play shifted then and he began to jump and sing.

The children’s first response was one of great excitement… lots of laughing and shrieking, quick looks and touches, darting and flitting from spot to spot. It was almost as though they were trying to take it in all at once. This lasted for about twenty minutes and then they began to slow down a little. Their second response was to jump, sing and dance in the loft. They quickly figured out how to get up, and more importantly, back down the stairs. It took the youngest a few tries to develop a strategy for backing down. Learning how to take turns on the stairs and wait while a friend is working their way up or down will likely take a little more time.

My first impression was that the loft is beautiful. I love the way the light from the window filters softly through the slats and creates patterns of light and shadow. I so enjoy the naturally flowing lines and curves of the loft. As I watched the children I was delighted by their reactions and watched attentively to see what they would do next. I am so curious to see how their play changes over time? What challenges arise? What questions? What curiosities?

After their (quick) lunch the children returned to the loft. They moved through the space even more slowly this time. A. and R. climbed up and then lay down side by side. “Are you getting ready to sleep?” I asked. They didn’t answer. They were busy whispering and giggling to each other. This is a special time.

Here are some photos from the first days with their Natural Pod Loft: